Ten things to know about the world’s most important trees.

1. Mangroves are the only tree on Earth that grows in salt water. Some others, like the cypress in North America, grow in a mix of sea and fresh (brackish) water, but only mangroves have evolved to process salt water and thereby make ocean shorelines their own.

Around the tropical belt of the world there are about 60 different types of mangroves species. Here in the Caribbean we have three – red, black and white. Only the reds live in the sea while black and whites grow on the hostile land adjacent to the water, often near enough the sea to be baptised by a high tide, but regularly quite a ways inland on the edge of what we call salt ponds. More on those later, but first, why are mangroves so important?

2. We all know that rainforests are important, right? Their photosynthesis gives us oxygen and grabs excess carbon from the atmosphere caused by human industrial activity which has overloaded the whole system. So when trees die and fall to the forest floor, that carbon goes back into the ground, where it should be. Well, mangrove and seagrass eco-systems are, in fact, the most effective carbon capture machine that we know of on Earth. Recent studies have shown that if you dig under an acre of Amazon rainforest and an acre of mangrove/seagrass, you’ll find, on average, 3 times more carbon buried beneath the ocean forest than the rainforest. How? It’s their super-efficient photosynthesis, the huge ‘bacterial mats’ that build up under the trees from rotting leaves and other matter, constantly being devoured by oxygen-producing bacteria, and the fields algae that thrive on the sea floor throughout the lagoons. All of these are high-efficiency carbon capturers and together that makes mangroves arguably the most important ecosystems on Earth. So, save the rainforest? YES! Save the mangroves? YES! YES! YES!

3. Mangroves are an essential part of the whole BVI marine eco system because they host a massive range of biodiversity. At the top end, they are a nursery for fish, many of which will spend their early months inside the protection of the trees before swimming out to open water where they populate our reefs and nearby ocean. Sharks, barracuda, stingrays, snappers and many more use the dense network of tree roots to stay safe and learn their roles in the food chain. So coral reefs rely on them as much as fishermen do. Smaller fish and myriad other species also live the quiet protection offered by mangrove forests. The magnificent, immortal, upside down jellyfish, conch, whelks, numerous crabs, lobster, as well as a wide range of land and sea birds, all inhabit these tiny wild spaces. Without the forests, we lose these life systems, too.

4. Mangroves protect our coasts. And they also protect our reefs. Hurricane Irma, again, showed us how true this is as houses and other structures – even our airport! – that were located behind mangrove forests, clearly took less damage than they would have if the storm energy hadn’t been dampened by the trees on the shoreline. And how do they protect reefs? They catch muddy run-off when we have floods. All the brown water that runs off the hillsides is carrying fine silt that gets stopped by the dense network of tree roots in the mangroves before it reaches the coral reefs and smothers it.

5. Sadly, in the BVI we have destroyed between 80 and 90 percent of these extremely important ecosystems. Most of them were destroyed to create flat land, which is also highly valued on our small, steep islands. Others fell victim to shoreline developments like marinas or docks. Still others were destroyed by hurricanes, and no Atlantic hurricane impact ever recorded was as strong as Hurricane Irma on September 6th, 2017.

6. While we’re on the topic, Irma’s damage was so severe that many people thought we had lost the few the mangrove areas we had left. But the difference between hurricane damage and human damage is huge. Hurricanes – despite the fact that man-made climate change likely made Irma happen at all – are a natural phenomenon. When nature destroys, nature repairs and we’ve seen this happen in the remaining mangroves of the BVI. Immediately after the storm there was some debate about how to treat the grey, apparently dead trees. Some said chainsawing the dead limbs would allow new growth to come through, and some were chopped. But after consulting with scientists who specialise in exactly this subject, mangroves and hurricanes, the advice was clear – leave it. One scientist who visited soon after Irma estimated a full recovery would take around 10 years. In the lagoon where we conduct our GroundSea Adventures paddling tours, it appears they were right, or even a little over in their estimations. Today, five years since Hurricane Irma, its safe to say that well over 50% of the mangrove trees have grown back.

7. Sharks, being top of the food chain, are an important creature in the whole ocean eco-system and several of them call mangroves their home-base. But don’t worry, it’s almost always the babies. After many years of paddling through mangrove lagoons the only fully-grown sharks I’ve ever seen are the relatively harmless nurse sharks that come in to mate during the summer months. The rest are babies, or ‘pup’ sharks, as they are known. By far the most common are lemon sharks, with black tip reef and, occasionally, baby bull sharks spotted in the lagoon. The pregnant adults swim into mangrove areas at night and give birth to their young before leaving them to fend for themselves. The babies have around 10 days to learn how to hunt and after that they become the scariest kids in the kindergarten. You can see their swagger as they browse the edges of the forest looking for baby fish snacks. But in a few months, they’ll swim out of the mangroves for good and becomes smaller, vulnerable creatures on the food chain, only returning to mate and give birth if they survive.

8. Recently, some of the baby sharks we see in the Beef Island lagoons have a red tag on their dorsal fin. This is because in 2022 the BVI-based marine non-profit organisation, Beyond The Reef started a research program to gather data that will help us understand more about them. By tagging both large adults out at sea and baby sharks in the lagoons, the hope is to build up a clearer picture of their activity, locations, range, longevity, size, etc. This information will then be used by others researching the same things in the region and around the globe, which means that our tiny coastal forests will be contributing to a broader understanding of sharks around the world. 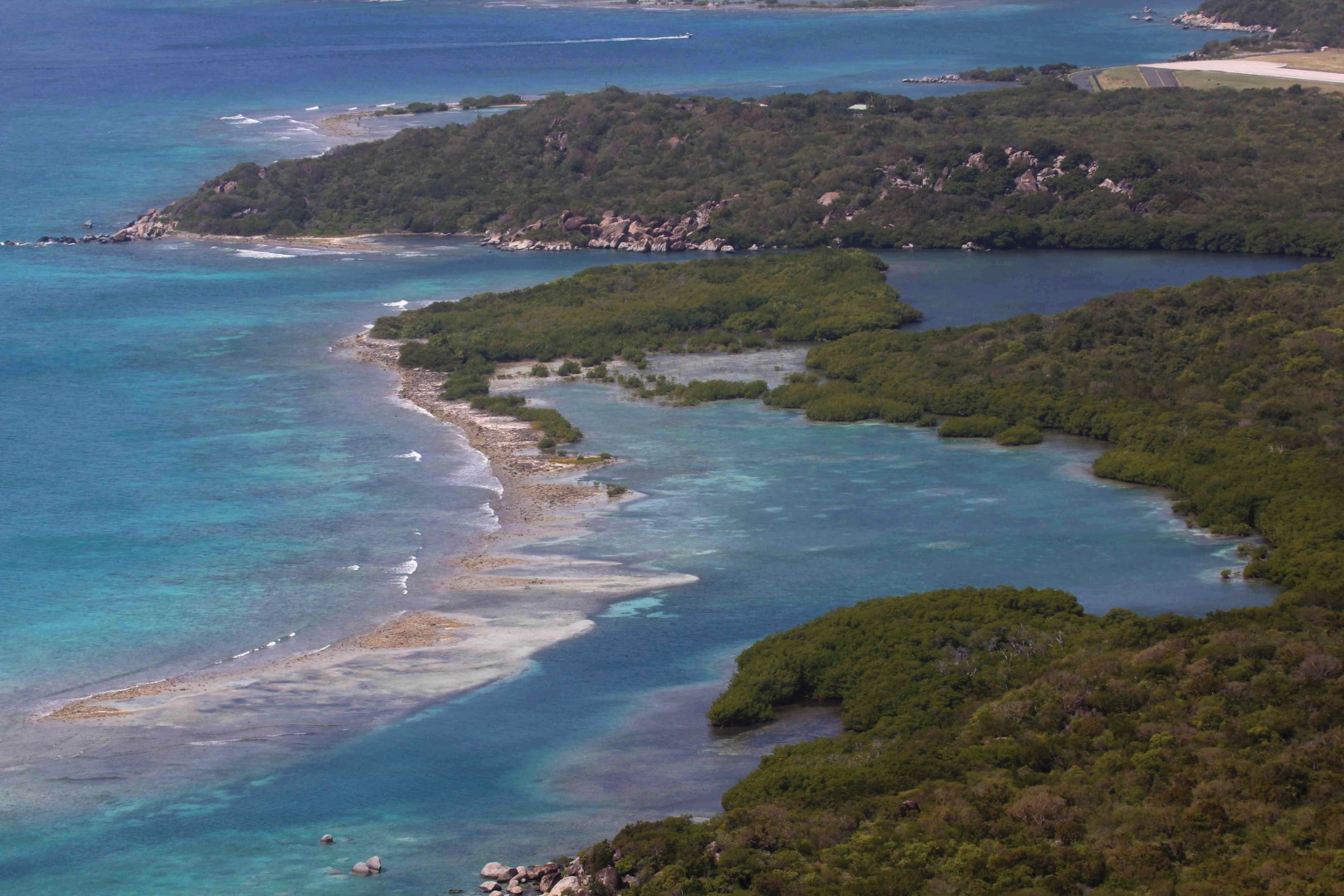 9. This research program reminds us that not everything humans do with mangroves is destructive. As a species, we’re part of the eco system, too, and for millennia we’ve engaged with these forests successfully without destroying them. Many mangrove areas, for instance, were used by pre-Columbus indigenous people as places to live, either permanently or seasonally. Then, as now, they offered great protection from the daily wind and the seas, excellent bait fishing and conch harvesting, a source of wood for homes and boats and of course shelter in extreme weather. These days we don’t use mangrove wood to build boats or houses, but fishermen still catch fry, sprat and other small bait fish in mangrove areas as well as harvesting conch. And of course when hurricanes come, mangroves are the primary place for BVI boats to hide out. Last, paddle tours and other low impact tourism activities can be an excellent way of educating both visitors and locals. Every year at GroundSea Adventures we host groups of school children and other BVI community groups, helping them learn about the magic in their own back yard, to enjoy and appreciate their surroundings and hopefully engender a desire to protect them for future generations.

10. Finally, a tangent that might affect the way you see many parts of the BVI. Consider our numerous salt ponds. Salt Island is so named for its two large ponds but, sailing around, you’ll see these broad, brown bodies of water (or dry, hard salt pan in times of low rainfall) throughout the territory. They often aren’t the prettiest sights – dirty, muddy, and sometimes harbouring mosquitoes and sand flies that thrive there after rains. But many people aren’t aware that every salt pond you see was once a sparkling, thriving mangrove lagoon. Over time, they are transformed by the gradual accumulation of natural ocean debris like dead coral and driftwood, as well as by major weather events like hurricanes that scrape the shoreline and sea floor and deposit debris across a lagoon entrance. Once the entrance is cut off, seawater is no longer flushed in and out, tides no longer affect it and gradually it evaporates leaving only its salt on the surface and the rich carbon deposits underground. At this point the red mangroves no longer survive, while the black and white are just fine. Rains fill the ponds up and droughts dry them out and at different stages they become home to all kinds of creatures from tiny shrimp and crabs to flamingos, scarlet ibis and numerous migrating birds that both feed and nest on them. It’s a reminder that the landscape we see now is constantly changing over time. Today’s lagoon is tomorrow’s salt pond, and in the meantime, the forests themselves are moving along our shores as seeds fall and new trees grown in new areas. The whole shape of our shoreline is constantly changing and next time you see a dirty, brown salt pond, think of it as a portal into the past, a guide to how the landscape has and continues to evolve.

See more at groundseabvi.com and surfschoolbvi.vg, on social media and TripAdvisor.