The Cruising Life The Island Life

The BVI is a Sailor’s Paradise

The British Virgin Islands is known as the ‘Sailing Capital of the World’ and for good reason.

The archipelago of about sixty islands, islets and cays provides sheltered waters smack bang in the middle of the trade wind belt. Easterly winds are relatively constant and blow between 10 and 25 knots ninety per cent of the time – perfect for fun sailing. The BVI Spring Regatta’s meme sums it up nicely, ‘Warm water, Hot sailing, Cool parties.’ Also noteworthy is the fact that the islands run from west to east and north; providing for exciting windward sailing, comfortable reaching and gentle downwind cruising under genoa or spinnaker.

Not only are the sailing conditions exceptional but the BVI has been blessed with a great diversity of protected anchorages, many with wonderful shore side attractions: restaurants, beach bars, unusual history and topography.

From the charter boat bases in Road Town, Nanny Cay and Hodge’s Creek, it’s a relatively short reach to the Virgins’ treasure isle, aka Norman Island, across the Sir Francis Drake Channel. For all other yachts visiting the BVI, Norman Island is at the top of the ‘must see’ destinations. Why? It’s because Norman Island was chosen by daring pirates to bury a huge hoard of treasure. In 1750 a Spanish flotilla was on its way to Spain when a devastating hurricane wrecked the fleet off the US east coast. British pirates, with no love of the Spaniards, seized an opportunity, helped themselves to what they perceived as ill-gotten gains by immoral conquistadors and sailed south. The piracy and its outcome are well recorded; a treasure chest of pieces of eight was found in the southern most cave just south of Treasure Point in the year 1910. Visitors to the caves love to feel the vibe of long-gone derring-do and to take advantage of excellent snorkeling in sheltered water where a myriad of fish and colorful coral make this underwater habitat their home.

Norman Island’s Bight is a large protected anchorage with numerous moorings and the famous floating bar, Willy T. This legendary watering hole has charter boats, day trippers and land-based visitors lining up for ice cold drink specials and the opportunity to jump from the top deck for an iconic photo.  At the head of the bay is Pirate’s Bight, a good restaurant with a sandy beach lined with deck chairs. Nearby are the Indians, an unusual rock formation that provides spectacular snorkeling and scuba diving. It’s a BVI national park location with mooring balls for temporary tie up.

Sailing east from Norman Island will have you tacking to windward on an exhilarating leg of your adventure, salt spray flying and the yacht showing its heels. The beautiful sandy beach at Dead Man’s Bay is worth a stop. Here you may well see turtles who feast on the sea grass. Although the island is privately owned, the beaches, trails and bar/restaurants are open to the public. Visible from the bay is Dead Chest Cay; immortalized by Robert Louis Stevenson in his timeless tome Treasure Island – ‘Yo ho ho and a bottle of rum, Fifteen men on a Dead Man’s Chest.’

The most famous dive site in the Caribbean is just off the south western tip of Salt Island, a short sail from Peter Island. The RMS Rhone, a state-of-the-art combination steam and sailing vessel was driven ashore by an intense hurricane in 1867; a hundred and twenty-four souls lost their lives. The wreck lies in water of depths between thirty and eighty feet and, being of steel construction, is still in remarkably good condition. Of particular interest is the huge propeller lying in the shallow end and visible to snorkelers; propeller driven ships were relatively new in 1867, slowly replacing the side-wheelers on older steamships. Underwater life is prolific with large schools of reef fish, crustaceans, shellfish, sponges, gorgonians and corals. The remains of the settlement are next to the salt ponds and trails can be hiked with fantastic views.

The next island to the east is Cooper Island with its recently refurbished beach club. The facility is just behind the beach and is open for lunch and dinner. The resort is a club by name only and is fully open to the public. It includes a scuba and watersports outlet, a popular bar/restaurant, a rum bar with hundreds of rums to get you into the Caribbean swing of things, a coffee shop, ice cream bar and gift shop. Good snorkeling is possible at Cistern Rock where you tie your dinghy to a line between two mooring balls. If you’re on a charter make sure you arrive at the anchorage at Manchioneel Bay early for a mooring ball or reserve a ‘boaty ball.’

The single most popular attraction and day time anchorage in the BVI is ‘The Baths.’ Here, national park mooring balls are available and a dinghy tie line must be used to access the beach. Giant granite boulders formed millions of years ago are miraculously situated and form unique trails and grottoes through pools of sunlit seawater. Natural sculptures and impossibly balanced boulders are breath taking along the main trail, which will take you to the quaint sandy beach, Devil’s Bay.  A walk to the ‘Top of the Baths’ will bring you to a shopping area and restaurant with fresh water dipping pool and nearby café, Mad Dog’s. 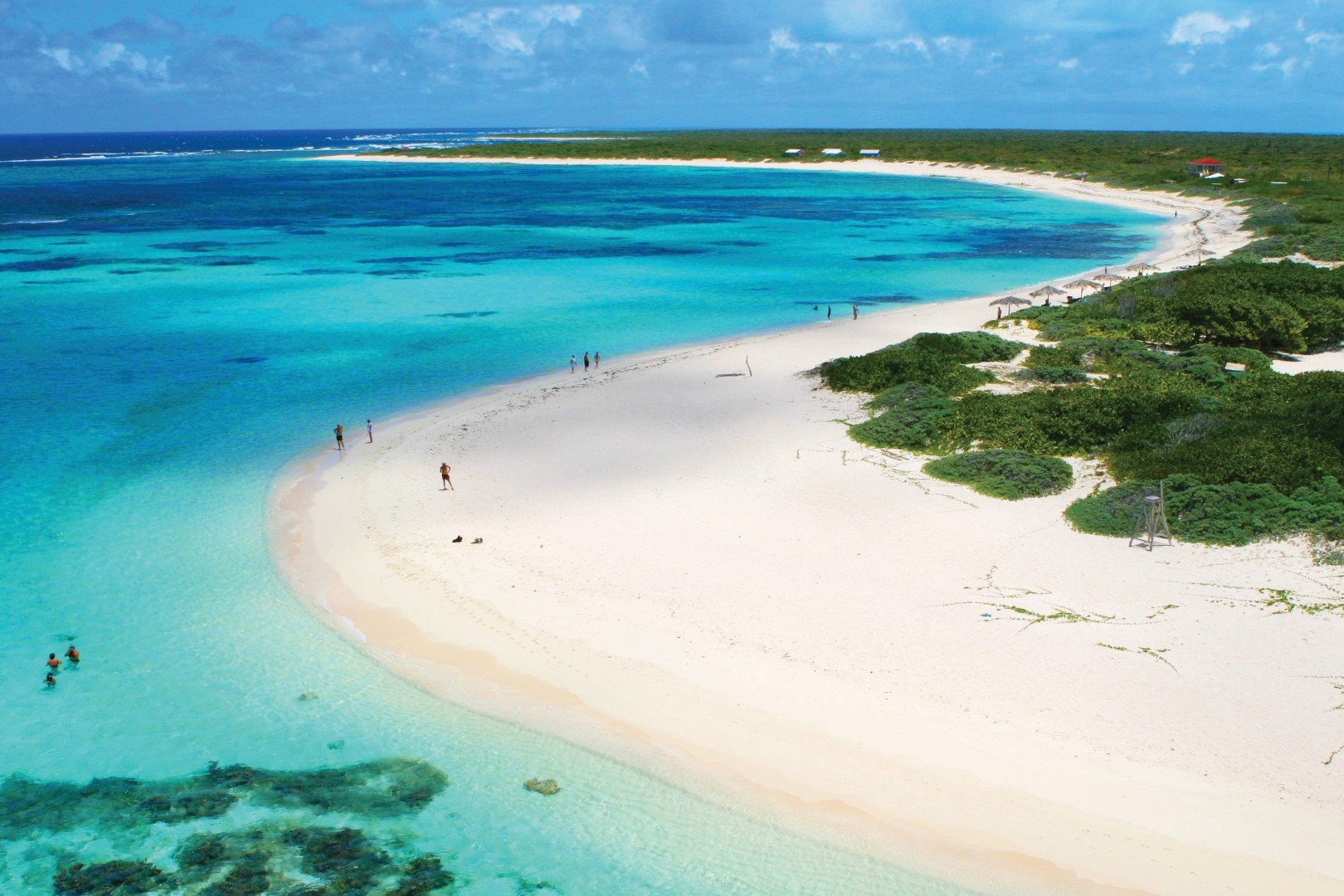 The North Sound is a perfect place to depart for Anegada, the BVI’s coral island. An early start is recommended to make the most of your time ashore. Usually it’s a thrilling beam reach in relatively calm water. On a catamaran the trampoline makes for a great viewing platform to watch the sparkling sea water rush by as you sail at up to 12 knots. Even at two miles distant the water changes to a translucent, turquoise blue and the sandy bottom can be seen at a depth of about 25-ft. Once tied to your mooring ball at Setting Point it’s time to dinghy ashore and head to the most magnificent beaches in the BVI.

Anegada now offers various options to explore the island. You can go to a single destination by shuttle bus or explore the whole island by scooter (great fun), rental car (pick-up truck with seats in the back) or Mini Moke (open air fun for four). Glorious beaches await with beach bar specials and Anegada’s famed lobster dishes. (for either lunch or dinner). Two attractions to see on Anegada are the pink flamingoes and the unique indigenous iguanas. The huge flocks of beautiful pink birds can usually be spotted in the island’s salt ponds; the endangered iguanas have an incubation and breeding area at The Settlement. For those more interested in beach fun the Big Bamboo at Loblolly Bay is spectacular. The restaurant is continuously ranked in the top three on the island with yummy lobster, conch, chicken and ribs.

The anchorage at Setting Point is lined with restaurants, all specializing in lobster and seafood. You will also find lively dancing and perhaps a limbo contest at Potters by the Sea. The Anegada Reef Hotel has a wonderful location and a great reputation; they started it all back in the 70s. Neptune’s Treasure has a local charm with the freshest fish, since they catch it. The Wonky Dog is the newest show in town and has an eclectic menu produced by a professional chef, Pete, whose wife, Desne, is the most bubbly and effervescent maitre d’ on the island. 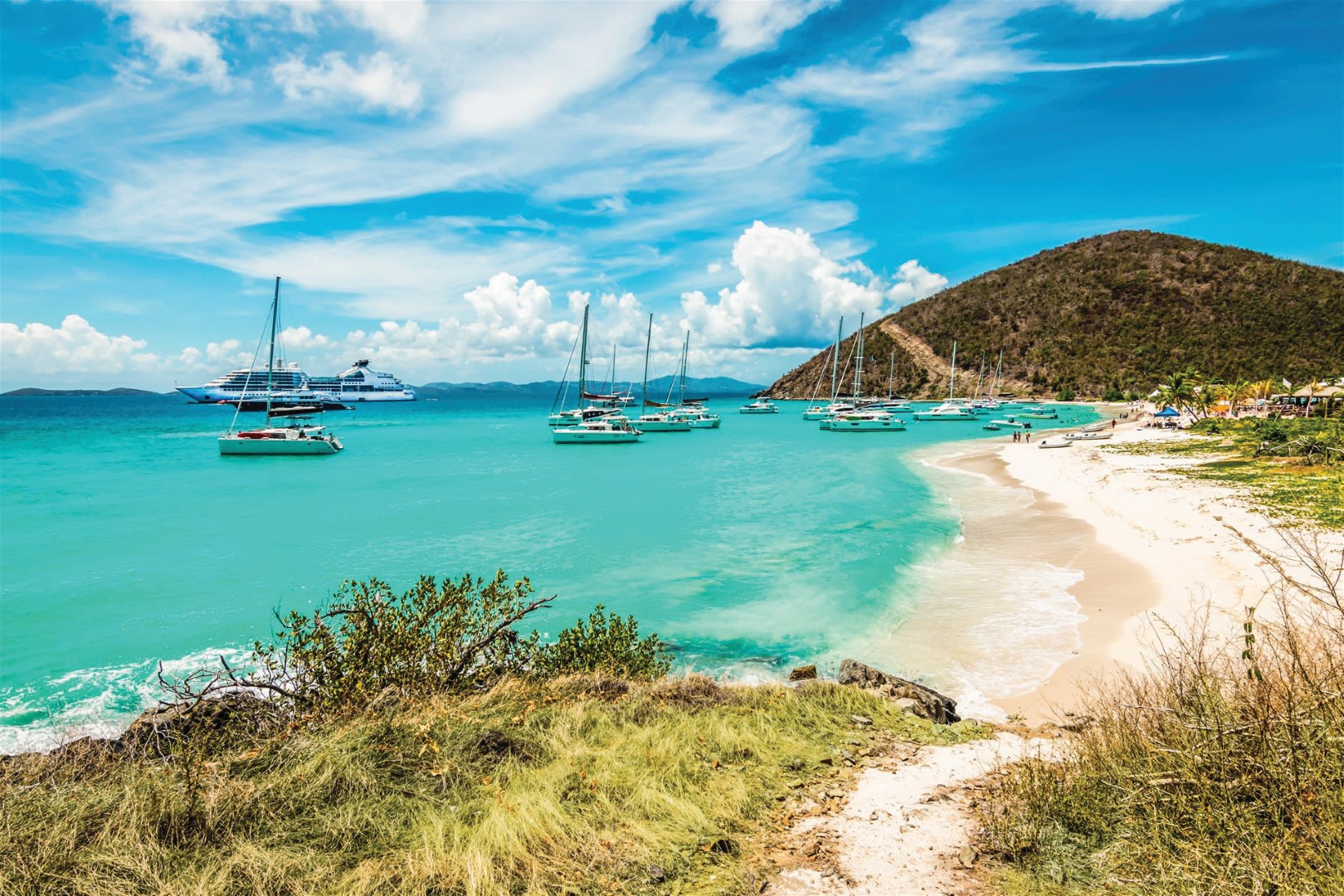 In the morning it’s time to set sail for Jost van Dyke. The sail is a smooth-down wind reach or run.  You may wish to stop at legendary Marina Cay or Guana Island’s quaint Monkey Point for snorkeling and to provide a lunchtime break. At Jost’s Little Harbour, Sidney’s Peace and Love will greet you with open arms – the most friendly watering hole and restaurant on the island with ‘pour-your-own’ bar. Great Harbour is home to the celebrated Foxy’s; their weekend barbecues are mouth wateringly famous. For fresh local fish and lobster dishes check out the newest bistro in Great Harbour the Typsy Shark. While on Jost Van Dyke don’t forget Foxy’s Taboo (dinner by reservation only) on the eastern end of the island a short hike from the Bubbly Pool.

The next bay to the west is White Bay, home to the ‘Soggy Dollar,’ inventor of the ‘more-than-one’ Painkiller. This beach is lined with shops and bars and is notable for its powdery white sand beach. Hendo’s Hideout is becoming a favorite for its excellent lunches and One Love should not be missed – try their luscious Bushwhacker.

On Tortola’s north shore lies the sweeping Cane Garden Bay. Besides a great choice of refreshment establishments, like Quito’s Gazebo which offer live entertainment every weekend, it is also home to Callwood’s Rum Distillery, open to the public and definitely worth a visit; it’s the oldest in the Caribbean. Their spiced rum is particularly popular.

The sail through the channel between Tortola’s west end and Little Thatch requires a certain vigilance but tacking up between St John and Tortola’s southern shore can be an exciting finale to what most describe as an ‘unforgettable sail through paradise.’ At the trip’s end the most common phrase heard is ‘We’ll definitely be back.’