In Conversation The Island Life

KIDS AND THE SEA (KATS)…filling the void

The British Virgin Islands is an archipelago surrounded by the Caribbean Sea and despite such close proximity to water, many people have a fear of swimming or venturing too far out at sea. However, two individuals Tom and Barbara Gerker saw there was a problem with children and how they managed the sea and decided they could fill the void with their programme called Kids and the Sea (KATS).

During a conversation with SailingBVI magazine, Tom disclosed that this year was the 32nd anniversary of the programme which started back in 1990 on St. Johns, United States Virgin Islands (USVI). Tom said the programme is built on three fundamental principles which are making children safer around the sea, opening the sea for leisure activities, and fun and sports for children while also exposing them to possible careers in the marine industry.

The inspiration for the programme dates back to 1987 when three boys scout drowned on a camping expedition in Lovango Cays, USVI. Tom said the boys had gotten into a rubber life raft with paddles and without any life jackets while not knowing how to swim. The boys eventually lost their paddles and could not get the boat to move. As with the unpredictability of the Caribbean Sea, the boys were caught by a current and swept onto a rock where the boat was punctured. Despite the boat being close to rocks, Tom said the three boys drowned.

“That was the impetus to start Kids and the Sea. It started in St. Thomas by three people. Two of them were Rotarians and the third was from USVI. At that point. Barbara and I were on St. John, and we heard about the programme, and we were trying to do something good there. The kids in St. John were worst than here. No one could swim. So, we started the St. John’s branch of Kids and the Sea that same year,” Tom explained.

In 1990, the couple moved to Tortola, and they were approached by some people to start the programme. Tom noted, with the first camp 49 children showed up to participate. He said the registration was done by Cane Garden Bay Beach where the children would register and do a swim test. Of the 49 that did the test, 28 passed and they were given books, uniforms among other things to start the programme the following Saturday.

Tom said, “they had to do a swim test and the swim test is not so much to make sure they are proficient swimmers but to make sure they won’t drown. To make sure they were comfortable because even with a life jacket on you can still drown if you are not comfortable. So, there was a crying need for swimming in the BVI, but we started off with sea skills which were team-rowing, knowing parts of the boats, how to row, how to tie knots and terminologies”.

Participants had to listen to lectures on parts of the boats, rowing commands, rule of the row, weather, navigation and first aid amongst other things. Tom glowed about the in-depth knowledge of the programme, reiterating the intention was to make children safer around the sea. He added that “in our programme, no one was ever in the water or around a boat without a life jacket on. That’s with all our programme except swimming and our scuba programme. Those are the only ones where they don’t have to wear a life jacket”.

KATS started as a simple team-rowing programme before the children started calling for more. Tom said sailing was added to the itinerary and the children embraced it. 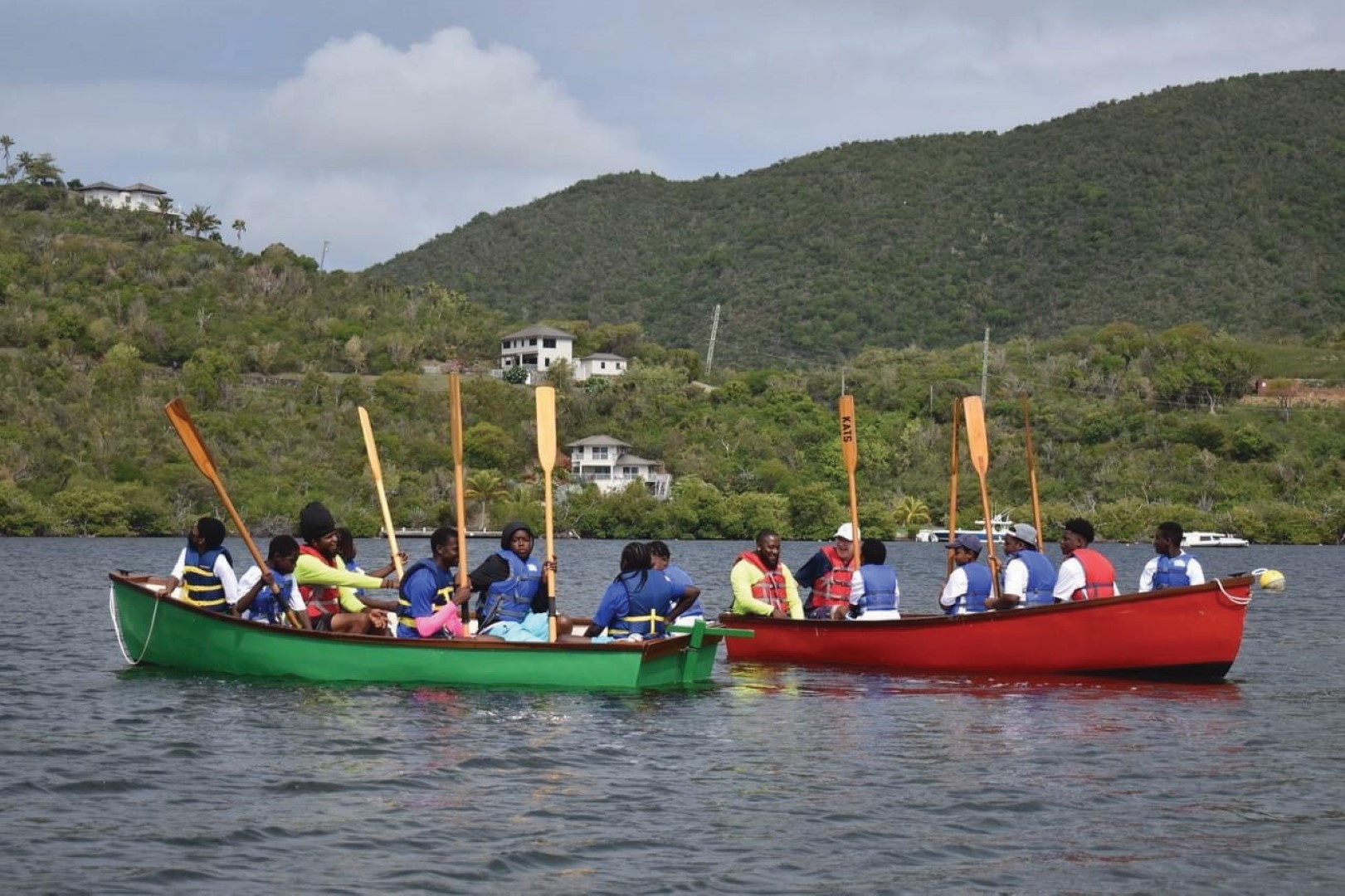 “We found some old sunfish and started a sailing programme. We started that in probably September/October, and we ran that until we started the next sea skills programme. So, we had sailing and then we branched off. I think the next one was swimming because there was a crying need for swimming instructions and there was nothing organized at the time. Then we did gorge sailing for five or six years, then scuba. So, we did that with the BVI Dive Operators,” he said.

Barbara chimed in noting the programme is now for 10–15-year-olds but when it first began, it was for children ages 9-14. While Tom disclosed he would allow eight-year-olds in sometimes, he noted scholastically there was a lot to grasp for the children and them handling the seven-foot oars. Tom highlighted they are now limited by the number of children they put in boats and the number of boats they have. While the programme is filled yearly, he said there are usually 28 kids per programme.

“The big challenge of the programme was that everyone in the programme was a volunteer. It was hard to get volunteers and if we had a couple years where we had a surplus of volunteers through the Rotaract programme, but it just became harder and harder to get volunteers. It was 12 weeks and by the time all the instructors were involved, we ended up working 14 weeks because there was planning, executing, and breaking things down. It was an intense time. So, it became difficult to do,” Tom said.

“We started off in 1990 in May. We did that for a couple of years. Three years on Saturdays from 8:00 a.m. -12 noon. After about two or three years we had a hurricane and that hurricane shut the programme down and then we started noticing the kids, come July, we would lose two or three kids. It was very important because the programmes built on the week before and if someone missed a lesson then it would be difficult to understand everything and if they missed more than two, they wouldn’t graduate. Then we decided to change that from starting in May and starting at the end of March. Our goal was to end In June or the beginning of July,” he continued.

While the programme has grown massively in the last few years, Tom said he is most pleased about the impact it had on the safety of children in the BVI who frequented the sea. He explained that when he first arrived in the BVI in 1990, children were drowning at an alarming rate, and he felt compelled to do something to stem that. Tom said one of the biggest things KATS has done is change many parents’ views on their children learning to swim and about sea safety.

Meanwhile, Barbara spoke candidly about the programme’s future. She mentioned dreams of expansion but noted manpower has been the major concern. However, with their new set up, she said people have been calling for an expansion and plans are in the pipeline to get more boats for the other islands so those children can learn about sailing and basic sea skills programme. As of now, only children on Tortola benefits from the KATS programme.

As with any organisation, funding can be a big roadblock and the couple mentioned they have been fortunate with gathering funding over the years. Tom explained the community played a major part in raising funds for the programme. Barbara then brought up the Premier’s Cup which represented a huge chunk of their fundraising endeavours.

Tom explained that the Premier’s Cup, which went by the Chief Minister’s Cup and the Governor’s at some point was an event which occurred in St. Thomas. He said the Cup was where different youth organisations ventured into St. Thomas to compete in various marine activities in the early nineties. Tom would send a team there annually and on one visit, he said the father [John Lewis] of one of his first graduate said they should start something similar on Tortola.

“We ended up inviting teams from all over the Caribbean, we had some from the Bahamas and a few years we had a team from the United States, and they would come and spend a weekend together, racing in a one-design sailboat. We would have as many as 12 teams and we would put them up in tents [at Nanny Cay  and it was really a great event. That was our fundraiser, and we would raise a lot of money with that,” Tom said.

Rotary Club offered volunteers to help with logistics and food. The event went on for about 15 years and every year the success grew where the programme would have surplus funds that would be able to cover the programme for the next year.

In 2017, the programme would receive a massive hit as the BVI was impacted by one of the strongest hurricanes recorded during the Atlantic Hurricane Season – Hurricane Irma and what many consider her twin sister – Hurricane Maria.

“We lost our fleet of sailboats. Those sank. We had a 40-foot aluminium container that was at the beach on Nanny Cay, that blew over and so we lost all of our sailboats. All of our training boats. Later that year on top of everything else, I ended up getting cancer, so I had to leave suddenly, and I was gone for eight months, and this was November/December of 2017. So, a lot of this happened after we had left and so the programme died for a while,” Tom said.

While KATS venture into it’s 32 years of existence, the couple behind it remains proud of their achievement and crowning jewel and hopes to see it continue to help develop the sea skills of children in the BVI as most of them will encounter the sea at some point in their lives.