It’s a story you have probably seen or heard a few times by now. The overwhelming support for the BVI marine industry and the recovery of the country after the devastation just a year ago on its land and the sea on which it is cherished as the sailing capital of the world.

It has been a year of expedited recovery and the BVI Spring Regatta hasn’t missed a beat to come back for the 48th year with slogans of No Fear- Just Great Racing and Fun as well as Building BVI Back Bigger-Better -Stronger.  Director of the regatta Judy Petz said “The energy and spirit of racing in the BVI’s takes more than category five hurricanes to keep people from coming back to sail and race.  We are open, ready and excited to welcome sailors from around the world to come for the first time or back for the 20th.”

The regatta hosted at Nanny Cay Resort and Marina will be held March 25-31, 2019.  Now with two marinas, the additional new docks will be available for more boats to stay at the venue’s marina.  Race week will include the traditional Round Tortola Race for the Nanny Cay Cup, followed by Scrub Island Invitational as the second day of racing in the Sailing Festival.

Three great days of racing follow for the 48th edition of the BVI Spring Regatta.

“Our sponsors are excited and so important to support us to bring crews, families, and friends back to the BVI.  Mount Gay Rum, our longest-running sponsor will have the first Mount Gay Day Race on Friday, March 29th.  The Moorings and Sunsail have a line of new boats to charter for racing or cruising to join the party.”  Sunsail has supported the International Yacht club Challenge for nine years.  It’s an opportunity for Yacht Clubs from around the world to send a team of their best sailors to compete.  Winner takes all with a free Sunsail charter to use to come back and defend their championship.

Local sponsors are critical to the event and partnerships with the BVI Tourist Board, Sea Hawk Paints, Carib Beer and many, many more, make the Regatta Village colorful and fun to return to for the “after racing parties”. Plenty of good food, cold drinks and great music for dancing on the beach and under the stars.

A Bit Of History 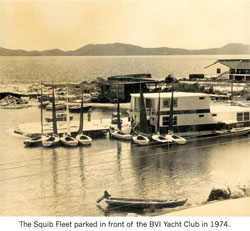 It began as just an idea. An idea sparked by a love of the tranquil blue waters of the Virgin Islands, the warm steady trade winds and the picturesque scenery of the islands.  In 1972, local sailors felt it was the right time to organize a major regatta. By that time bareboat charters had established themselves in the BVI, there were small Squib and Sunfish fleets and other privately-owned yachts. Additionally, the BVI sailing contingent had a five-year history of organizing sailboat races.

As members of the then BVI Hotel and Tourist Association, Peter Haycraft, Albie Stewart, and others, used their influence to establish the first Spring Regatta, Over 20 boats, including Squibs, competed in the first regatta, which was won by the yacht Nutmeg skippered, by Alex Forbes of the United Kingdom.

The very next year, with the formation of the BVI Yacht Club, the Spring Regatta became a joint effort between the BVI Yacht Club and the Hotel Association.  Many local businesses seeing the benefit of a partnership with the regatta soon joined as sponsors.  As the events marketing efforts have grown those sponsors are part of not only a local event but are seeing the benefits of being promoted around the world.

From its early success, the Spring Regatta has grown in size and strength due largely to the support of racing enthusiasts from around the world who return year after year to compete.

“We also take our responsibility to the environment in which we play very seriously, said Judy Petz, Director of the Regatta. “In 2008 we began recycling all the bottles from the event; over 15,000 were collected.  The following year we reduced the use of plastic by selling refillable water bottles for $5 and Clearwater provided free water for all those who purchased the bottles.  The water bottles have become a signature of the event. Celebrating 10 years of being a “Clean Regatta”, we have had the honor to be the first Carbon Neutral regatta in the world in 2010 and maintained our Gold level with Sailors for the Sea, a worldwide environmental organization.  We feel we have inspired many other regattas and originations to follow our lead.” She added.

Today, the BVI Spring Regatta and Sailing Festival is one of the Caribbean’s premier annual racing events. It has developed a reputation for serious competition and serious partying.   By popular demand, the event has evolved into six days of non-stop racing action and seven nights of partying. Throughout the week, islands and resorts play host to participants with parties and prizes designed for those that sail and those that just want to have fun.